I just finished teaching my Marine Invertebrate Biodiversity course at Shoals Marine Lab. This year’s 3 week course was the best-ever, largely because of the very enthusiastic crew of students. This year, our quest to find the most phyla was led by Patrick Brown, our intrepid hunter of kinorhynchs, ciliophorans, and chaetognaths.

Our final tally included 18 phyla, which encompassed the “usual 12” plus kinorhynchs, ciliophorans, acanthocephalans, tardigrades, entoprocts and chaetognaths… Included in this diversity were a lot of exciting life history finds, like many different nudibranch and gastropod egg masses and a spectacular diversity of larvae in the plankton, from Mullers larvae, to Ophioplutei to hordes of veligers… This year was also distinguished by an unusually active bunch of early morning low-tiders. Team Invertebrate were not only uncomplainingly awake at 6 am, but actively searching for every novel invertebrate to be found in every habitat from exposed to protected low intertidal, from shallow to 100m deep plankton, day and night, from Appledore to Smuttynose, from rocky coast to the tidal flats near Creek farm (WORMS)

After collecting, Team Invertebrate transformed their observations in the lab into fabulous lab drawings… 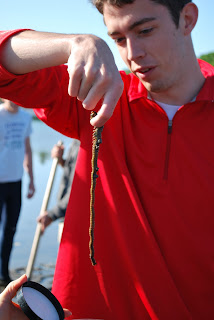 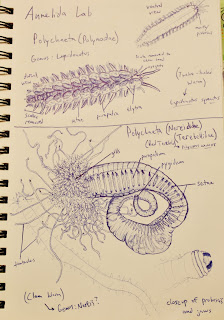 The intrepid TA, Morgan Mouchka and I scrambled from dawn to well after the fabulous late evening sunsets to deliver a learning framework in the form of field trips, lectures, labs. Projects turned out well, revealing deficits in feeding behavior of parasitized snails, differences in where the larvae were between deep and surface plankton, intriguing incidences of developmental anomalies in snail egg masses, and phenotypic plasticity in snail shells from different sites. Let’s hear it for Experiential Learning and thanks to Willy and Shoals Marine Lab!